Cintec™ Rail delivers a proven method of assessment and repair to railway infrastructure, including:

Tested in conditions in the worldwide, Cintec™ Rail has demonstrated the versatility—as well as the cost-effectiveness and durability—of its solutions.

The Cintec™ anchoring system is a permanent structural solution, suitable for use in a large variety of substrates for tensile, shear, bending and compression loadings where certainty of performance is required. The patented system of using a sock with a high-performance cementitious grout (not a resin) ensures a perfect job when installed by Cintec™-trained and -approved installers.

THE STRENGTHENING, REPAIR AND STABILIZATION OF MASONRY RAILROAD BRIDGES

Archtec is an engineering process to strengthen and refurbish masonry arch bridges and structures. The process involves advanced numerical modeling of the bridge and simulation of the loading regime to specify a retrofitted reinforcing system. A computer model is used to determine the load carrying capacity of the bridge in its current condition.

Live loading is simulated to develop an optimum design for the retrofitted reinforcement. The reinforcement utilizes the Cintec™ anchor which has been developed specifically for the ancient and often historically important masonry. The combination of discrete element analysis, numerical simulation, engineering and a unique anchoring system forms the innovative approach which ensures old bridges can be preserved and continue to function under existing loading the much increased loading demands of the railroad authority.

The Archtec method of strengthening and stabilizing bridges, offers engineering flexibility that reduces, or even eliminates bridge closures during the reinforcement work. The installation techniques are surgical and leave little evidence of structural invasion, in compliance with the policies and recommendations of Historical Restoration requirement.

Fenchurch Street Station is one of London’s busiest rail stations; it is the start point and terminus for the main tracks from the South of the U.K. to London. The construction itself is a remarkable example of Victorian ‘railway’ Architecture and was built at the height of rail travel era. The tracks carrying the service to the station travel over a Victorian Viaduct, comprising a series of arches. These arches support the cantilever system of signalling that guide trains to and from the station. The structure is a large steel gallows extending out over the track, with the signalling system suspended from it. The engineer had to recognise that any work on the structure had to address the problem of a live track running overhead.

The torqueing of the anchors

The assembling and installation of a compression anchor

A system was required to secure the gallows to the bridge arches; in their preliminary planning, Railtrack anticipated a shut down of the tracks for 6 weeks. Such a closure would mean a chaotic time table, irate passengers and a loss of revenue. The Cintec™ anchoring system proposal provided a solution that would require only 2 days of rail shut down 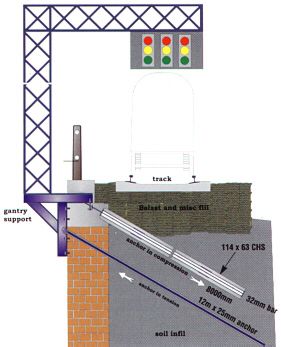 The proposed solution involved three Cintec™ anchor types. The central one was a compression anchor of stainless steel comprising a 32mm shell rebar inside a 114 x 6.3 CHS installed in a 200 mm hole, 8000 mm deep, at an angle of 30 degrees to the horizontal. Below it was a tension anchor, comprising a In tension solid stainless steel body, 12 m x 25 mm installed in a 50mm drilled hole, and attached to the gantry support to prevent any rotation. Two smaller shear anchors 20mm x 800mm were similarly installed to complete the support. Load tests were carried out, with the placing of a 20m steel beam in position.

As a result of the use of a Cintec™ installation, disruption was reduced from 6 weeks to 2 days together with a 50% saving on the original budget Railtrack had allocated to the project.