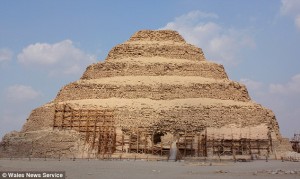 Egypt’s oldest pyramid has been saved from collapse by giant airbags which have been used to prop up the ceilings.

The 4,700-year-old building has been stabilised so engineers can carry out permanent repairs.

The giant structure was built as a burial place for Pharaoh Djoser, a warrior who reigned in the third dynasty for 19 years but has been damaged in an earthquake.